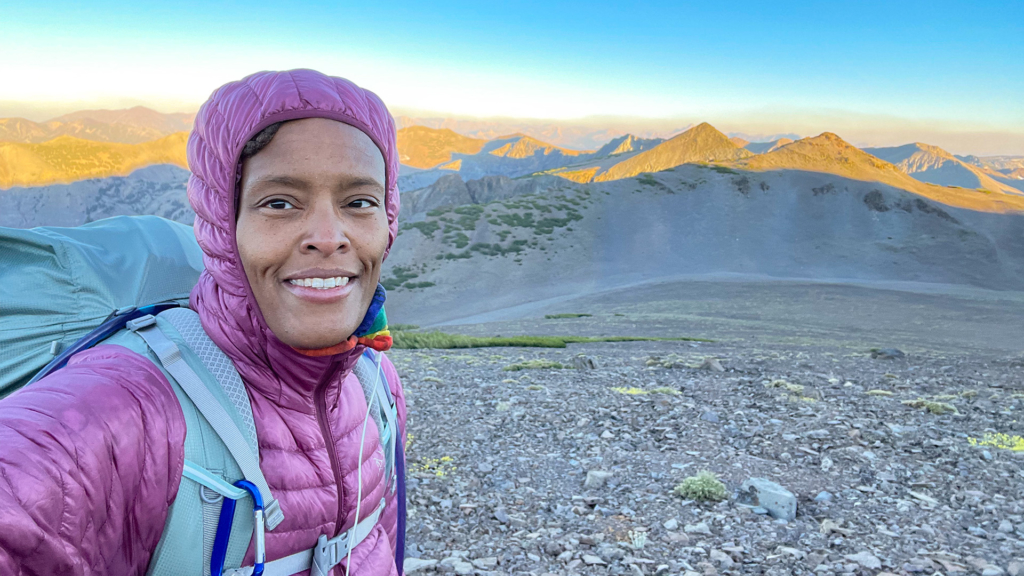 Fires are ablaze throughout California, wreaking havoc on homes, businesses and wild landscapes. Folks from all walks of life are working endlessly to extinguish the devastating effects of the wildfires amidst a drought and scourging heatwave. I can’t help but empathize with Nature and see how much she is suffering. The majority of trail users are people who can insulate themselves from the everyday reality of environmental injustices—such as these wildfires—and can afford to focus solely on preserving the purity and sanctuary of Nature. I think of you who call California home, like my family out in Oakland, and it saddens me that you can’t just leave and go back to your homes; you’re already home.

I wrestled with these notions crossing Highway 108 at Sonora Pass into the High Sierra. Sauntering southward, I bore witness to the destruction of an earth thirsty for rain, some trees scorched to bare trunks others hollow pits where trees once stood. The lingering decay of soot in the air filled me with grief and an awareness that this destruction is a direct result of humans.

As of this writing, the U.S. Forest Service has closed every forest in California and asked that trail users exit all forest lands immediately. This order is an effort to utilize California resources efficiently and ensure the safety of those of us lucky enough to be here. Forest Service staff have an incredibly important job, and I appreciate the work they do. In my work to make Nature more accessible for BIPOC (Black, Indigenous, People of Color) and the various intersections of my identities, when it’s all said and done, I want us to have a planet to live on. It got me thinking about my impact and use, and listening to Nature.

Upon exiting the Inyo National Forest, I talked with fellow hikers about the purpose for my hike and what the closures would mean. They expressed concern that I wouldn’t officially complete the Great Western Loop. They explained that in skipping the closed section it wouldn’t be an official thru-hike. I smiled and said “that’s fine by me.” I have come to understand, and I hope that others will too, that this notion of a thru-hiker is unattainable for most. Aside from the costs of gear, food and in-town lodging, there’s the cost of taking time off work. Then, when you add costs associated with bypassing closures, it’s even harder. For a lot of aspiring BIPOC thru-hikers, the additional uncertainties are additional barriers to accessing the outdoors.

During my final week on the PCT where it meets the John Muir Trail, I’ve met white hikers who struggle through injuries in their attempts to complete the trail. One fell over a cliff and another had a broken foot. This willingness to complete at all costs, when most people (primarily those who look like me) will never set foot on this or any trail is not only dangerous but a travesty. This lack of concern for themselves puts Nature at risk as well as the forest and park service employees who may be called to rescue them.

In the spirit of making the outdoors more inclusive and accessible, changing the “you’re not a ‘real’ backpacker unless you are thru-hiking” stigma is a good place to start. We need to eradicate the mindset that once on trail you have to keep pushing through even when it’s dangerous to yourself, others, Nature, or when the Forest Service mandates that you leave.

I am taking cues from Nature as I go along, and seeking a deep understanding of my mission to make the outdoors more inclusive for all—for generations. Maybe she is telling us to give her time to recover and grow. Out of respect for Nature and a desire to give her the time devoid of people that she needs to heal, I am now transitioning eastward toward the Arizona Trail to continue my Footprints for Change Hike of the Great Western Loop.

I am amazed by how much I’ve learned in my short tenure with Nature. I didn’t grow up with an appreciation for Nature. It evolved and expanded over time. As I gear up for my trek along the John Muir section of the Pacific Crest Trail (PCT) and continue to section hike the Great Western Loop, like many hikers I find myself devouring books, articles and videos about other hikers. I have learned a lot from the hiking community, such as the importance of Leave No Trace and navigation skills. Yet, there is limited information on how to mitigate being a Black female, lesbian, hiker with a disability. I need to know that I’m not planning my resupply in a town where I will encounter overtly racist or homophobic people, and I need up-to-date information about recharging my medical implant. If you think this is not an appropriate topic for outdoor recreation, you have two clear options: stop reading or remember the lesson I’ve learned from Nature: “be quiet and listen.”

To those of you who decided to be quiet and listen: starting my hike on the PCT has meant spending energy understanding the culture that exists along the trail. The PCTA (Pacific Crest Trail Association) recently posted a blog supporting diversity, equity, and inclusion within the organization and on the trail. I’ve been a bit disheartened to read various social media comments to the post denouncing or dismissing the experiences of others. Many of those folks spoke words of hate and ignorance while proclaiming that the outdoors is “free,” “open” and “inclusive.” Don’t get me wrong, Nature is the most inclusive place I’ve ever been, but she is not devoid of people or their ideologies and mindsets. The same folks who spew hate, racist, homophobic rhetoric and enable others to do so don’t trade their beliefs for a pair of trekking poles. The trailhead isn’t a magical portal that frees one of their biases, nor is it a mystical road devoid of personal experiences. Wherever we go, we take ourselves and our baggage with us.

I would like to address the folks who want to say that politics has no place on the trail, the PCTA has no business posting articles like this, and “I don’t see racism, so it doesn’t happen.” Throughout history, parks and trails across the country have been conceptualized, created and managed by predominantly white men who held racist beliefs. People of color and marginalized folks were rarely considered major stakeholders in outdoor recreation. Historically, people of color have experienced segregation from a multitude of park agencies. First, you don’t have to experience or observe racism or discrimination directly; instead, you can trust those affected when they tell you it’s a problem. Second, it is impossible to remove these social dynamics from the trail. As many people commented, “trees aren’t racist,” but the parks and trails that people built are based on racist ideologies and practices. Meaning they are, at their core, institutional. I am a Black woman, a lesbian, and I have a disability. I am not “politics!” I find it absurd to hear that racism doesn’t exist in the backcountry, on trails or at our national parks because the trail is a legacy of racism. One might argue that these things happened a long time ago, and things are better now, and the outdoors is inclusive. Sure. However, that doesn’t reflect my experiences which have been echoed in various comments on aforementioned posts.

My formative years were spent as one of only a handful of Black students at predominantly white schools. I was taught history that excluded my ancestors before slavery and reduced them to a 28-day curriculum in February. I was never taught about York, a Black man who led the Lewis and Clark expeditions, or Matthew Hensen, who was both the first person and the first Black man to ever to reach the North Pole. During show and tell, my classmates would bring in photos and memorabilia from camping trips and visits to National Parks. I’ve known about camping and hiking, but none of the people I ever saw in pictures, textbooks or magazines looked like me. They were white, able-bodied and mostly males. I’d rarely see any women in the outdoors and never anyone of color. I associated Nature with whiteness. I didn’t have a teacher or anyone else to teach me otherwise. I have since learned that It’s not Nature who is discriminatory.

On record, my kin originate from the Deep South, the backwoods of Louisiana. My ancestors were enslaved and forced to work in cotton fields — later, in those same fields, my Great Aunts and Uncles would go to play before landowners would forcibly remove them. Little consideration was given to the fact that it was the one place they knew intrinsically. As a result, my kin never encouraged us to connect with Nature, at least not for recreation. I learned, however, the importance of being outside for celebrations. Birthday celebrations, cookouts and barbecues are ways that my relatives readily embrace the outdoors together. We understand the freedom that being outdoors affords.

One of my favorite celebrations is Juneteenth, June 19. Today in 1865, enslaved Black Americans were emancipated. I find it fitting that the way the newly freed Blacks rejoiced was by going outside. Inherently, people know that to find peace, we need the outdoors. But, in order to find that peace in the outdoors we need to have respect.

“Shhh….be quiet and listen” and believe other peoples’ experiences.